Got up at 4am and left the lodge at 5.15 for a journey into the jungle with Ruth a crees employee and two other volunteers, we were looking for woolly monkeys. 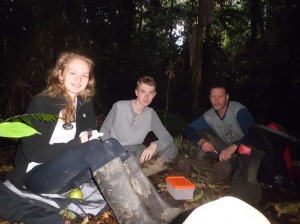 We stopped for breakfast at about 7am which consisted of cold rice, chips and sausages, then on through the jungle again but it was now getting more difficult as although there was a path it wasn`t very clear and Ruth had to use her machete quite a lot and occasionally refer to the gps, quite a few times we went off the path to see if we could hear the monkeys and it was tough going. 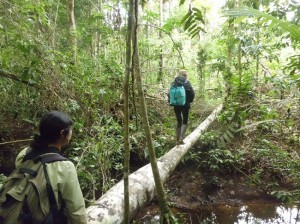 Unfortunately we never saw any woolly monkeys but we did see some Golden Tamarinds and we could faintly hear howler monkeys, Ruth said you can hear them up to four kilometres away. 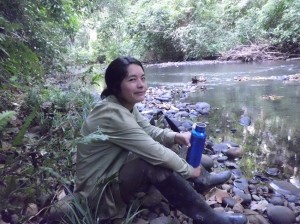 We eventually arrived back at the lodge at 3.30 pm and after ten hours in the jungle we were beat, never has a cold shower been so good.

Although it is warm in the day it can get cold at night as we have had a mini friaje which is a cold spell that can rise up from the Artic and cover Peru, the friaje`s can get very cold and last for a week or more but I think we have got away lightly.