We have just heard the sad news that Peter has lost his battle with cancer. 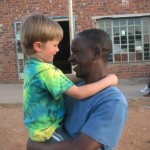 This is such a sad loss for those of us that knew and respected him – but an immesurable loss to the community he cared for in Mapoch South Africa.

His family, friends, congregation and community are in our thoughts.

” Now that I have had time to get over the shock of hearing about Peter’s sad passing I thought I would write something of my memories of Peter.

They are only happy memories of a wonderful man who lived for his community and family, who shared his time selflessly with other people.

I remember the happy times I spent with Peter, the visit to Sunset Cycles in Johannesburg and the excitement of picking up the donated bicycles and buying the spares we needed to build the first bicycle trailer.

I remember Peter learning how to fit a bicycle tyre in the shop.

I remember the excitement of planning our trip to Cape Town and Jeremy and myself teasing Peter about his first flight in an aeroplane.

One day before we left for Cape Town I was speaking to Jeremy on the phone and he said to ask Peter if he had his dompas, I didn’t know what this was and as I heard Marnie laughing in the background I tentatively asked Peter if he had his dompas, he laughed and explained that it was a passbook that black South Africans used to need to travel, this brought home to me the reality of being a black South African in the apartheid era and what Peter must have suffered.

I remember four of us sharing a room in a hotel appropriately called fawlty towers and Jeremy keeping us awake with his snoring! It was a great time four boys together enjoying ourselves.

We visited a couple of bicycle projects in Cape Town and we also visited the headquarters of BEN bicycles and I watched Peter taking everything in, asking questions of BEN and the guys running their own bicycle projects and I could see how enthused Peter was by the idea of running his own bicycle shop and I knew then that Peter would do a great job of running his own Bicycle shop.

Peter told me that during apartheid, blacks were not allowed into night clubs but as he had some white friends who wanted him to go with them to a night club they hit upon the bright idea of whitening Peters face with makeup, this actually worked and Peter got into the club unfortunately due to the hot humid conditions in the club the makeup started to run! And of course Peter was found out and had to leave the club.

Peter told me this with a laugh and smile, I wonder if I could recall such a situation with humour, I don`t think I could.

Peter said to me one day “the white man is amazing you can do anything, you`ve landed on the moon” I said to Peter “that`s because we are brought up to believe we can do anything” and of course being a black South African Peter was treated as a second class citizen and told he couldn’t achieve anything, well you know what – he achieved extraordinary things!

I fondly remember the fun we had fitting out Peter`s veggie shop as a bicycle spares and repair shop , building the bicycles we had donated to us and watching Peter building bicycles himself.

I remember building the first bicycle trailer with Peter, neither of us had done it before but we learnt as we went along and you know what I don`t think it turned out bad in the end.

It`s such a sad time but I can`t help smile at the wonderful memories I have of Peter, he taught me so much and he was a wonderful extraordinary man who I will miss deeply.

“It’s really sad to hear the news of Peter’s death today. He was a wonderful man whose company I thoroughly enjoyed during the month I spent at Mapoch and I was pleased that on returning home my own church were able to contribute towards some building work for his church. Peter was always humble and rarely without a smile on his face. He told me of his previous life and how he had been turned around by the love of God. Several of us visited his church for a service, while at Mapoch and whilst we couldn’t understand the language it was a privelage to be there and join with his congregation in worship.

Peter will be much missed by the guys who helped him at the bicycle workshop, and whom he cared for. He worked long days , starting with prayer very early in the morning and visiting people who were sick right into the evening. He was still cheerful even  when he heard he had cancer and I am pleased to have photographs of him both from the time I was at Mapoch.As Jeremy said the comunity has lost a very very great man. Rest in Peace Peter, you will be remembered by many.” Bruce

” A gentle man full of warmth and heart, rest in peace Peter” Kristian

“We are so sorry to hear this. We worked with Pastor Peter when we built the extra classroom at the school and found him to be a wonderful humane and gentle man who took us into his heart and helped us succeed with our project. Our hearts go out to his family and friends. Xx” Sally and Bill