volunteered at Amar Jyoti School in Nepal. I don’t think I have ever read anything that demonstrates so well the gift of education – particularly reading and comprehension.

Thank you all at PaperTigers for donating books to the Amar Jyoti school in Nepal.     Your books were such a help when introducing different teaching methods to the Nepalese teachers.

When the PaperTigers books first arrived there was a certain amount of apprehension from the Nepalese teachers who thought that the books were too precious to be shared with the children because they might get damaged. It was such a  joy to see a child eventually being allowed to pick up a book to look at the pictures and discuss the story with  friends

The Shree Amar Jyoti Gaun Pharka is a government school situated in the eastern part of the Pokhara Valley in Nepal,  some 200km west of Kathmandu.

English is the single most important educational tool a Nepalese child can have.

Without it, they cannot take public exams and the School Leavers’ Certificate.  The aim of the school is to teach in English but the teachers’  lack of skill and confidence in the language make this an ideal rather than a reality.

Most of the people who live in this area are semi-subsistence farmers of different ethnic and caste groups, and they cannot afford to send their children to private schools where the lessons are held in English. The primary class children in Amar Jyoti have only one English Government text book – and not even all children have one of these.

The only story books available are those that have been taken out by volunteers.   There is a small library in the secondary school with books written in both English and Nepali and it is hoped in the future that the primary school children will be able to visit this library on a timetabled basis.

Thank you all at PaperTigers for donating books to the Amar Jyoti school in Nepal. Your books were such a help when introducing different teaching methods to the Nepalese teachers. 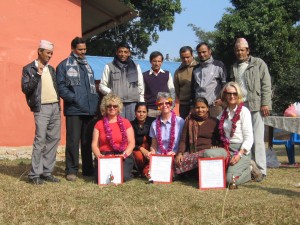 Nicki with teachers and co-volunteers

When the PaperTigers books first arrived there was a certain amount of apprehension from the Nepalese teachers who thought that the books were too precious to be shared with the children because they might get damaged. It was such a  joy to see a child eventually being allowed to pick up a book to look at the pictures and discuss the story with  friends

We discussed where Luis might be taking his precious books.   After initial silence,  and then yes or no answers, the children  began to give responses.   Later it was a joy to see one or two of the girls write their own summary of the story.

We also read Biblioburro to the younger primary school children.

They were really excited to see the pictures and to be able to touch the book. It led to further animated discussion about methods of transport and the different sounds these would make (lots of vrmmm vrmms and clip-clop of the animals’ feet) The children learned lots of new vocabulary like lorry, bus, motor bike, train.   This was particularly useful as it is a necessary part of the Nepali curriculum for the children to recognise these English words.

The school lacks basic resources, and writing materials are precious but some of  the children drew  pictures inspired by Biblioburro and I will forward these on to you by post . 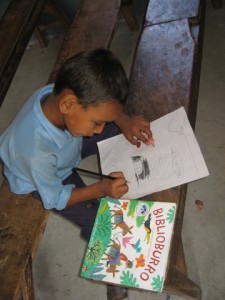 ‘I like the butterflies in the pictures.   I can draw butterflies’-Sophiya aged 5

‘Luis would get there quicker on a motorbike’ – Buddha aged 7

This uplifting book was the children’s favourite.  They loved the illustrations and returned to look at the book again and again.

There was much that was familiar to them in the pictures.   Many  have seen tailors working outside on their sewing machines and the majority of children have a family goat.   They related to the children in the book learning their alphabet and they have experienced  the monsoon rains washing away buildings and roads.

We discussed the similarities and differences between Africa and Nepal and the children loved looking at a map of the world and learn about different countries.

We ‘walked through’ this book together discussing the illustrations and story, and copies were left with Year 5.  It was difficult for the children to empathise with those in the story but it led to much talk about the importance of looking after their own environment, which had already been discussed.  The children have been  encouraged to tidy up their school grounds and perhapsplant small flowers in pots.

The girls in particular enjoyed the way colour was brought in to the  pictures.   This book will doubtless leave a lasting impression on the older children and they will gain something new each time they look at it.

All the pupils in the school were thrilled to have received these lovely books.   Watching the little ones being allowed to turn the pages and look at the pictures  unsupervised was a very specia lmoment.   It  was also thrilling to  see some  older boys picking up Rain School and then looking for Africa on the world map.

Thank you on behalf of the children and staff at Amar Jyoti.    Your donation has brought much to the school and has opened the childrens’ eyes to life in other countries as well as helping to show the staff how enriching books can be.

More volunteers from England will be going to help the school in 2012, and I hope to return later in the year.