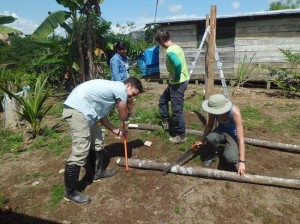 We went to Salvacion on Tuesday morning and arrived at the bio garden we were working on at about 9.30 and worked all day until about 5pm, working in the open with no shade was really hard and we were all worn out by the end of the day.

We made really good progress despite the heat and by the end of the day we had fixed bamboo poles to the posts we erected last week, and then we covered the roof with plastic sheeting to stop the soil being washed away in heavy rain, as we were fixing the sheeting it stated to rain so we timed it well.

We had one casualty in Sharron who cut her thumb on bamboo which is very sharp. 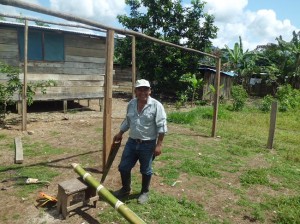 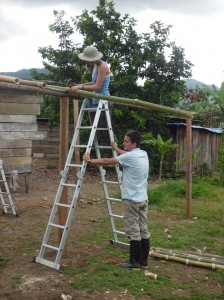 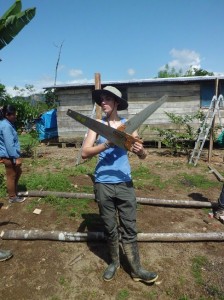 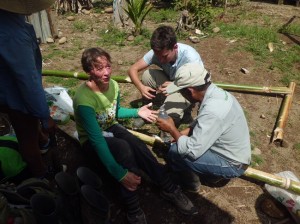 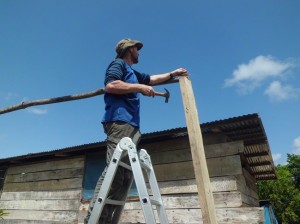 Nigel posing with a hammer

We went to a local hostel when we had finished and we were all looking forward to a shower unfortunately they had no water so we trekked down to the local river, stripped to our underwear and sat in the river for a wash!

As soon as we were all clean we went out for a meal in town which was very good and stared with a big bowl of soup followed by rice, salad and some sort of meat on the bone which we suspect was Alpaca! Whilst eating our meal we were watching Peruvian TV which was hilarious and seemed to consist of a gladiator type show with lots of women wearing skimpy shorts running around a lot!

We then did a bit of shopping to stock up and sweets and fruit and maybe the odd bottle of beer! which Nica and I managed to consume back at the hostel, and then finally to bed with two guys and two girls bunking in the same room.

Wednesday morning we were up at 6am and had to wash our own sheets in the local river! And then to town for breakfast which consisted of rice (we are by now sick of the sight of it!) some sort of meat and some yellow lumpy, runny stuff!

We then went to the bio garden until 11am, I spent most of the time reinforcing the chicken wire with heavy duty wire threaded through the top and bottom and the rest of the team cut bamboo and made surrounds for each vegetable plot and then filled them with soil. By the time we left the bio garden was more or less done and just needs planting and some chicken wire and a door on one side. 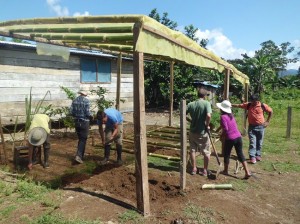 All in all we had a lot of fun and got a lot of work done so it was a really successful trip.