The beginning of my extraordinary experience started in 2007 when I booked a trekking holiday to Nepal. 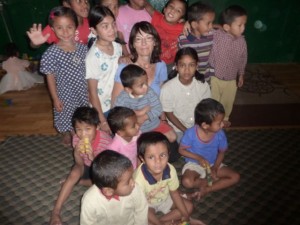 There was a small piece in the holiday brochure about volunteering, which I have always felt I would like to do, so I enquired and that was how I first met Kate and Sallie at people and places
After many phone calls, emails and forms filled in they arranged for me to stay in Kathmandu after my trek and volunteer for a month at a children’s home. They gave me contact details for other volunteers who would be there with me and those going the month before and we were able to correspond before setting out – very useful.

When I arrived in Nepal for my trek I met the group already there, who were the first to go to that project and were paving the way for the rest of us who have since volunteered at OCCED Naxal

There were about 50 children, both boys and girls aged from birth to 12 years. Another lady was with me and as volunteering was new to the home they were very unsure about ‘the English ladies who came to help’. On our introductory visit we were told there was a festival the next day and no school so we would be looking after the big boys, 10 of them aged 6-12 years. Children start school at six and those at the home attend a local private school, receiving a good education. We had not been prepared for being with school aged kids so spent that evening making a bingo game out of card so we could keep them occupied.
They soon learned how to play and it went well with all of them wanting to be the caller. They had no games or toys or even coloured pencils, we gave them paper and felt pens to draw pictures, did mental arithmetic and asked them to write about themselves. All schooling is taught in English, their reading and writing is good but their spoken English is broken and their accent was hard to understand.

This has improved greatly in the four years that western volunteers have been going there. 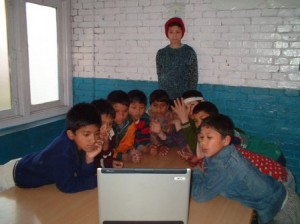 The rest of our time was spent with the pre-school children because the teacher was away visiting her family, 20 boys and girls aged 4-6 who didn’t speak any English, except one 6 year old girl who acted as our interpreter. Discipline was a big issue and my favourite phrase that she taught me was ‘ramro sanga basa’ meaning ‘sit down and be quiet’. I was greeted with this by the big boys the next day and it became my catchphrase.

I was so sad when it was time to leave. It was a wonderful experience and I thought about the children often, wondering how they were getting on and which ones were still at the home. Some return to their families and others are adopted. I was able to get some information from other volunteers who went there over the following months as we were all asked to write a report about our experiences and people and places sent these out to past and future volunteers, also some of the photos they had taken were published on P&P website.

I wanted to go back and spend more time with the children so much that in March 2010 I booked flights to Kathmandu, joined a group holiday visiting different parts of Nepal and P&P arranged me to go to the Children’s Home for a month.
This time instead of staying in a hotel I lived with a Nepalese family, which gave me an insight into their way of life. 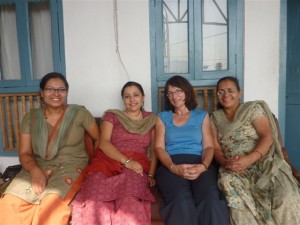 The first thing I did on my arrival in Kathmandu was to call at the home – I walked into the recreation room unannounced, the children were used to volunteers arriving by now and they all looked at me and started talking at once, then one of the older girls called my name. She remembered me, it had been 2 years and she was only about 7 the last time I was there. I was delighted. Most of the children I had spent time with in 2008 were at school now so I was glad when there was a general strike and the schools closed so I could spend each day with the older kids, especially the boys.
The strike, caused by the Maoists, bringing the country to a standstill and the streets of Kathmandu were deserted – very surreal – shops shut, no vehicles, no-one went to work or moved far from their homes for fear of reprisals but as a tourist I happily walked to ‘work’ along these quiet streets as the pollution cleared, the air freshened & kids rode bikes & played cricket in the middle of roads normally choked with traffic honking their horns. I must admit that I was glad when it ended and the shops & ATM’s were open again. I had borrowed money from my host!

Three volunteers left the day after my arrival and then I was the only one for the rest of my stay. During the bandh (strike) the teachers, office staff and board members were unable to come in so it was just me, the children and the live in staff. I spent a lot of time with the boys but was often joined by others who came to the front yard to play and talk.
It was very difficult to leave and say leave. – needless to say I was crying as I walked down the road
I had become even more attached to the children, staff and board members who run the OCCED charity that I knew I would return yet again and in September 2011 I had booked my flights and found a group holiday to join. This time I would be there for 2 months, broken by the 2 week holiday to Tibet. I chose to stay at a house that is a cross between b&b and homestay in a residential area close to both Thamel, the tourist centre of Kathmandu, and the Children’s Home at Naxal. Living again with & among locals I learned more about the Nepalese people and their way of life.

The board members, staff, carers & children are like a huge family taking care of, looking out for and helping each other, playing, fighting and arguing, laughing and crying. They love to welcome a new child and are very upset when one leaves, but are pleased if they are being adopted and getting a new mummy & daddy or better still returning to their own families. It is usually the little ones up to the age of 3 who are adopted, into both Nepalese and foreign families, so the older ones will probably be there until they finish their schooling and go out into the world – another issue that will need supporting.
I could write pages about the children – but maybe another time!

The buildings currently being used for the Children’s Home & offices of the OCCED charity are rented, in a terrible condition. The owners want to demolish them and sell the land for building. I have known from my first visit that the board’s intention was to buy some land and build a purpose built home that was more suitable to house the 40 to 50 children in their care, the staff who look after them and provide offices for their organisation, which runs other projects too
In 2011 they bought some land just outside the centre of Kathmandu that they took me and 2 other volunteers to see. We were so pleased that their dream was finally coming true. All they needed now was £200,000 to put up the building so I decided to try to raise some money towards that,I have a page on Just Giving http://www.justgiving.com/OCCEDNepalBuildingProject where donations can be made to the fund, UK taxpayers get 25% gift aid added – for those who do not like making online payments or want more information please contact me at dot-nepal@hotmail.co.uk

Fund Raising for a new Children’s Home in Kathmandu

Donations to the JustGiving page for funds to help build a new home for the children at OCCED Nepal has reached £4,000 including gift aid. Thank you very much to all who have donated and give support to these children.

The first phase of this project is to acquire required land for the building construction. In this context OCCED/Nepal has already purchased 22 Annas (1 anna equal to 342.5 sq. ft ) of land from the available fund with OCCED/Nepal.  It has reached very near to target for purchasing of 34 annas of land for the project.

We are very much hopeful to start the construction of building in next few months.

A draft building design and 3D design has been developed and forwarded to its main stake holders for approval and final decision.

For updates on the progress of the fundraising, plans & artist impressions and the building of the new home visit: https://www.facebook.com/pages/OCCEDNepal-Land-and-Building-Project/166532886774533