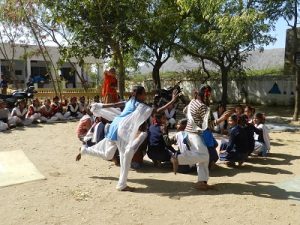 I have recently returned from a really satisfying and encouraging trip to India.  I went to visit the school where our volunteers work, Chitardai Upper Primary School, in Rajasthan.  I have volunteered at Chitardai twice myself, in 2010 and 2011, working with the English teacher in his lessons and helping all the teachers to develop their school motto ‘Learn Through Play’ by showing them a number of techniques for active learning – I must confess it’s my favourite of the places where I have volunteered.  Other volunteers have taken a similar approach: bringing books, games and a variety of other resources to show the children (and teachers) that learning English can be fun!  Like all of us who volunteer, I have sometimes questioned whether the resources I took to Chitardai were really relevant and useful to them, and whether the teaching techniques I demonstrated to the teachers would ever be used when I returned to the UK.  So it was fantastic to see on this trip that some of the teaching strategies and resources taken to the school by me and other people and places volunteers are now embedded in the school.  Some examples . . .

. . . in the store cupboard are several sets of flashcards, taken by volunteers, which are covered in dust and clearly not being used.  But one teacher has ordered a set of flashcards of her own, showing letters from the English and Hindi alphabets, and is regularly using them in her teaching – a clear example of a teacher taking a technique demonstrated to her by volunteers and making it her own.  Several volunteers have introduced techniques for keeping all children involved in learning, for example the use of red/green cards to hold up if you agree/disagree with a statement, and the use of named lolly sticks to decide which child should answer the next question.

A teacher new to the school knew about both of these techniques – he had been shown them by another teacher who had worked with some of our volunteers in the past.

Another example: as part of the volunteer orientation I was walking through the town of Deogarh when a man on a motor bike pulled up.  He was introduced as a teacher from another school who had attended a teacher training session I ran in 2011 – he told me he is still using a resource I distributed then.  I repeated my teacher training session as part of this visit so I hope it had a similarly useful impact this time!

And my favourite example – last year a volunteer took a magnetism box to use in her Science teaching and left it with the school for them to use.  A teacher and three students from class 8 took this to a Science Fair at a secondary school in Deogarh.  They described its use, speaking in both Hindi and English, and won top prize and a commendation from the local education officer.  Despite the fact that I and two other volunteers were at the school at the time, including the person who took the magnetism box last year, they did not ask us for help with this or even tell us they were going to the Science Fair – they had the confidence to do this entirely on their own.

All this has contributed to the school being designated a ‘model school’ by the local education department – the numbers on the school roll are increasing and I felt the teachers were more focused on helping the children learn than when I was working there before.  This does have its disadvantages – the school is rather crowded and there is not enough furniture for all the children to have desks and chairs.  Ideally they need more classrooms and more teachers – currently they have three temporary members of staff brought in to help cover the deficit – and one of them used to attend Chitardai himself!  He is such a fantastic role model for the children and really goes to prove that a child from this economically-poor and rural community can aspire to a professional career as a teacher.  Don’t get me wrong, this is still an under-resourced school in a rural location, and there is still a very long way to go before it can aspire to the standards set by schools in wealthier parts of India, as well as in the developed world.  Those teachers at Chitardai who speak some English understand the language but are reluctant to speak it – they have learned English as an academic subject not as a spoken language.  They are also shy, especially the women, until you get to know them, so patience, persistence and encouragement are needed when you first arrive to form any rapport.  Some of the resources and techniques volunteers have brought have proved not to be of use to them, and I’m not surprised by this.  However I am hugely encouraged to see the uptake of some of our ideas and the contribution this has made both to the education of the children at Chitardai and to the standing of the school in the local community.  As volunteers, we often feel we achieve nothing and worry that we are trying to impose ways of teaching inappropriate to people living in such a different community and culture.  Well, this trip has proved to me that these feelings are wrong – in this school our contributions have been genuinely welcomed and are yielding great results.

An important part of setting up valuable volunteer placements and of making sure volunteers are well looked after while they are working at the school is the role of our local partners.  On this trip I worked closely with Nanaki from Ibex, our local partner in India and with Bhavna, from the royal family whose former palace provides a home for volunteers while they are in India, and whose role includes supporting volunteers on a day-to-day basis.  I thoroughly enjoyed getting to know them both and believe we achieved some useful work together.  I also enjoyed renewing my acquaintance with lots of people in the town of Deogarh and at the hotel, and was gratified how many people remembered me after nearly five years!  I also enjoyed working with our two volunteers who were then working in Chitardai – Sue was on her first placement there and was working alongside the teachers with the younger children, while Yvonne was on a return visit and was teaching English and Science to the older children, showing their teachers how to make use of practical experiences in teaching, ranging from a trip to the local town as a stimulus for writing in English to practical experiments in Science.

So if you have experience in teaching or as a classroom assistant, I really encourage you to think about volunteering at Chitardai.  The school would like people who could encourage oral activities with the children – they are used to learning in a book-based, teacher-led way and really need people to help them develop the confidence to speak English and to pronounce it correctly.  The teachers have not been taught in this way themselves, so they are keen to learn any techniques we can show them.  They have benefited greatly from volunteer help in English and Science and would now love volunteers who could show them how to extend the active learning approach to other subjects, especially Maths.  With the younger children their emphasis remains on making learning fun.  The teachers would like to learn new games to play with the children, as a means of teaching, as well as new stories and songs.  The school curriculum does not include any form of craft work, and no music or drama, so the teachers are always happy if volunteers can show them ways of incorporating some of these activities into their normal curriculum.  There’s plenty of scope here to match people with a wide range of skills related to working with children, so why not give it a go?  It’s a really interesting cultural experience for you too – living in a former royal palace, in the centre of a small and vibrant Indian town.

I love it there and I think you would too.

For more information about volunteering at Chitardai read here.