At first I thought the video was a spoof – to my horror it wasn’t – take a look at the video here  if you don’t the rest of this post will be pretty meaningless.

My first reaction was to “out” the profoundly disturbing video on all the social networks I’m on – as an example of how bad “poverty tourism” marketing can be.

What I should have done was wait until I had written this post. Less than two weeks ago I wrote a piece about the need to stop bitching about poor practise and promote good practise .

So now I am trying to put that right.

I want to start by stating again that I firmly believe the vast majority of “voluntourists” are well-meaning.

I have absolutely no reason to believe that the motivations behind making this video are suspect – rather that they are ill-informed.

I am no expert in psychology – I certainly don’t know all the correct language – and I know a lot of amazing people doing humbling work in thier own countries – we are very lucky to work with some of them. Their advice would be more valuable than mine – I am happy to put anyone interested in touch with them – the recent winner of the Virgin Responsible Tourism Award Reality Tours and Travel  would be an excellent source of advice (and I don’t know them personally !)

I also need to be clear – we at people and places believe that the chances of doing damage when “volunteering” for a matter of days or hours  are way way higher than the chances of doing good – and therefore we do not advocate such trips. I’m not questioning the ethics of “voluntourism” as such – BUT what I really want to address here is the message this video is sending out – subliminally, perhaps, but the message is there! 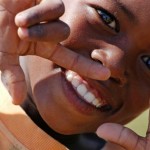 Oh dear – now my attempt to balance bitching makes me sound like a smug know all – well I can’t avoid that.

What do you think?

It would be great if you could post some examples of responsible voluntourism and “poor tourism” marketing here – I’m struggling, but here are a couple: