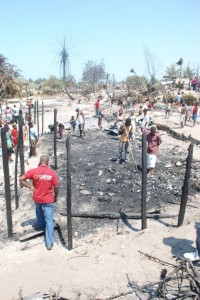 On Sunday evening at around 9pm a fire broke out in the fokontany of Amparihy. Fanned by extremely strong winds, it quickly spread from house to house and across the dry shrubs in between. People attempted to put out the fire by throwing sand on their houses and breaking a water pipe to use as an extinguisher. Two fire engines also arrived at the scene from the airport and QMM but as there were no roads leading to the houses where the fire was it was very difficult for them to access the area.

A total of 164 houses burnt down and around 640 people are now homeless.

On Monday morning delegations went from the Commune, Ministry of Population and Azafady to Amparihy to assess the damage and see what needs to be done to help those who have lost everything.

The Mayor provided some buckets and several bags of rice and other organisations are now considering their response.

Azafady are setting up a donation fund for anyone who wants to support those affected by the fire that can either be accessed through a link on our facebook site or given in person to the Azafady office in Ambinanlikely.  The proceeds from this will then be used as part of Azafady’s co-ordinated efforts alongside other partners in Fort Dauphin.

We are also collecting clothes that will be distributed to the community so these can also be dropped off at the office over the next couple of weeks.  Further updates and information will be posted on the Azafady facebook site.

Thank you for any support that you can give, for donations please go to http://www.bmycharity.com/fortdauphinfirefund

Director of Programmes and Operations – Azafady.