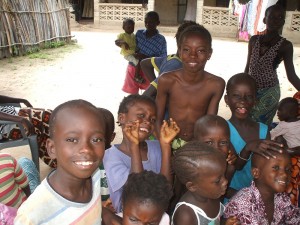 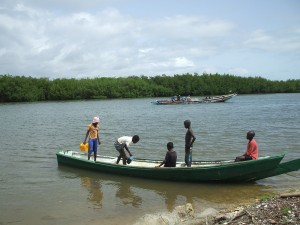 It`s 12.45pm and I am writing this in Safari Gardens, it`s raining steadily which it has been doing since about 7pm last night, it`s ironic that we should have so much rain on my last day here when the weather has been so good for the last three and a half weeks, but then they do say the sun only shines on the righteous!

Adama picked me up from Sandele and we dropped in at Concern universals office to meet the staff and say goodbye, Kelly was there and it was our first and last meeting.
The guys gave me a present of a picture of an African village which will now take pride of place on my living room wall, I also received a present of a Gambian shirt (very funky!) from the community at the GIG farm, it was all very touching and I just about managed to keep it together.
Unknown to me we were supposed to meet some of the community at the GIG farm in Sifoe this morning but because of the constant rain and flooding it was not possible, probably just as well or I really would have lost it!

I know how I would feel on my departure after volunteering in South Africa but it doesn`t make it any easier and I know that I want to come back to The Gambia as I do South Africa, now how long would it take to ride my motorbike from Northern Spain to The Gambia? Got to be quicker than a certain airline I could mention!

Adama is scheduled to pick me up at about midnight and my flight leaves Banjul at 3.10am, so I will leave The Gambia a few pounds lighter due to the heat and humidity, a lot browner and with less hair than I arrived with!Oh and a few mossy bite scars!