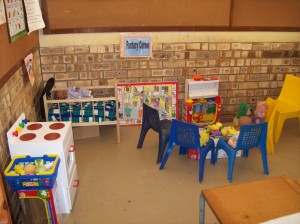 When I spent a month at Isaac Booi School in Zwide Township, near Port Elizabeth, I was lucky enough to take with me money, given to me by friends, relations and my old school. With Paul Miedema’s help, I was able to buy books, toys, sports equipment and consumable stationery for the school, having first secured a good discount at the educational suppliers!

With the headmaster’s assistance, we also made the reception classroom more secure with burglar bars so that the equipment did not have to be locked away in the administration area each night, and we tried to make display a priority by improving the pin boards in several classrooms.

All of this was very satisfying but….

When I was close to leaving I asked Paul how help might be continued and whether they had any projects in mind, particularly related to the younger children. Never lost for an idea, he immediately mentioned that they were trialling a classroom assistant in one of the other cluster schools, with the specific aim of giving the hard pressed Grade One teacher some much needed help with the youngest children, new to school. The Calabash Trust was paying for the trainee to have Early Years education and she was receiving a modest stipend on which to live.

This seemed to me to be an excellent notion on three counts; an employment opportunity for a young Township person, help for the teacher and a better adult to child ratio for the children. In Isaac Booi I knew there was a great need for this as I had visited the Grade 1 class on several occasions, even though I couldn’t work there as the children were speaking Xhosa. The teacher, Miss Ethel, is a lovely lady who fully understands the need for young children to have play opportunities and never seems to have any kind of break.

I spent a good deal of the funds available to me on the youngest children, buying lots of books, stationery and play materials, including things for a home corner, and Miss Ethel had brought in a bookcase from home to make a book corner. However, it still didn’t give her the physical help she needed with so many children. I said to Paul that I thought I could raise the £600 needed for the stipend and I came back to the UK and then emailed fifty friends and family asking them to send £10 and Gift Aid it.

I was truly surprised by what an easy way this proved to be of raising money! Within two weeks I had nearly enough and one school friend, whom I had not seen since we were eighteen, sent £50 (having had the message forwarded to her by another school friend) and has subsequently given me more, preferring, as she says, to support charities where she knows her money is reaching those most in need. By the time I had sent off the response to the first appeal I had £800 when the Gift Aid was added in, more than enough to get Noluthando started. 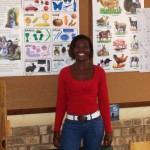 As time ticked by I have received pictures of Noluthando with the children and reports on her studies, all of which showed how wisely the headmaster had chosen from many applicants. She did so well in her first year that she went on to further training to become a qualified teacher and now has her own class in the school where they have been able to divide the reception class into two and Paul reports that those classes ’are a revelation’. I recently received copies of her final grades, which were all excellent.

Noluthando has now graduated and the schools are trying to get her on to the regular pay roll of the school; not an easy task in South Africa where the schools never seem to know their financial standing and what they might receive from the Government. Unfortunately, the Calabash funds for the Early Years training have now been exhausted but with some friends help I was able to see Noluthando through to the end of her training and I feel immensely proud of her, even though we have never met.

I was very lucky during my time at Isaac Booi with my fellow UK teacher, Rita, as she and I ‘hit it off’ from the start, sharing the same sense of humour and a lifelong career in teaching. She was recently back there on holiday but visited the school and was able to bring me back some photographs and first hand reports. She also brought me two lovely letters, one from the teacher with whom I had worked and the other from Noluthando expressing her gratitude.

It is lovely to feel you have made a positive difference to someone’s life but they had just as big an impact on mine and I thank them for all the love and kindness they showed us. It was truly a life changing experience and I hope I will be able to continue the help them and perhaps one day meet Noluthando.