There are some shocks to start with, then some shopping … 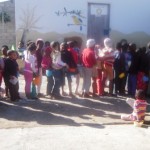 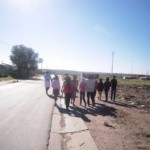 Thursday was my first full day at Emmanuel and it began with a visit to the clinic. The clinic is around 3 miles away from the township and with no transport, the only way for the carers to get people there is to walk. We picked up an elderly lady, Nancy from her home, which she shares with her husband. It is a shack made of corrugated iron consisting of a single room and her muscles are so sore that it took us a good while to manoeuvre her from her chair into the wheelchair that we had brought her. A rotting piece of wood formed a plank between the house and the street and I worried that it may give way. I peered in again as we waved goodbye to her husband and noticed a framed Nelly poster on the wall. We then proceeded along the dusty roads to the clinic, myself, Maz (another volunteer) Sarah (a carer at Emmanuel) and Vuyo (the only man that works at Emmanuel) taking it in turns to push the wheelchair.

As we passed through the township, children playing football in the street paused to let us pass and there was continuous music- Usher, Rihanna, Ne-yo, being pumped from the houses. When we finally got into the clinic room, the nurse dressed Nancy’s wound, which is so bad that she needs a skin graft, although she will have to wait until November. I was asked if I wanted to watch, but told the carers that I am not a nurse.

Beside me a child was screaming as he was given an injection and soon I was seeing black spots and realised that I had to leave the room to put my head between my legs. Frustrated at my squeamishness I tried to do so discreetly, although Vuyo followed me outside and kindly told me that he had done the same the first time that he had visited the clinic. Of course, there are people at home who are weak and in pain like Nancy, but the thing that I found most difficult was that she had been left to her own devices. Before Emmanuel had stepped in to help she had missed appointments to collect her Antiretroviral drugs because she had been unable to walk to the clinic and could not afford a taxi; consequently she was branded a ‘defaulter’ by the hospital and put to the end of the list for treatment.

It was good to gain a sense of the township and the distance to the clinic by going there on my first day, but I was glad to be able to spend all of my second day working with the OVCs. 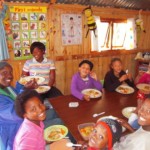 My day began with a counselling session and after this I had a very positive afternoon with the OVC’s, getting to know them better, playing cards and bingo and conducting workshops on human rights and self-esteem. On Monday we are taking a trip to play netball at the sports centre so today I have spent the afternoon scouring the mall for netball bibs, finally having to settle on buying 14 t-shirts and scrawling the positions on them with marker pen! In fact I found the shoppers at Greenacres to be fairly mixed and Miki and I spent a good deal of time people-watching, whilst also planning excursions that we hope to go on in the upcoming weeks.