Dot Coupe was visiting Naxal Orphanage when the earthquake struck – instead of dashing home she stayed – here is her story.

I first came in 2008 under the care & guidance of Kate & Sallie at people and places and have returned often in the past 7 years. I am committed to these children, most of who have been here since before that first visit.

I usually stay for 6-8 weeks, this time I was visiting for only 3 weeks but the earthquakes made me change my mind. All airlines were offering free change of flights so I cancelled mine and was told I could fly home any time up to 10 December 2015 but had to make the booking by 31st May.

The first earthquake cracked the old house and that first night everyone slept out in the yard. Most of the children were indoors at the time with just me and a handful of little ones playing outside on the judo mats that had been left out on the brick yard. There had been a judo practice that morning.

There was a rumbling noise and movement, both of which got worse, the ground was shaking and the children were afraid. Realising it was an earthquake I called them to me, they could not walk straight, they clung to me as we sat on the mats. One little boy bumped his head on the basketball post as he wobbled along in his attempt to reach me. Luckily that was the only injury anyone received. The girls came running down the stairs from the 2nd floor terrified but the boys just looked out of the windows and door of their dormitory where they were watching a dvd. I shouted for them to come outside as quick as possible.

We all sat on the mats watching a pipe sticking up on the roof as it wobbled from side to side.  Next to this pipe the solar unit fell of its stand but was prevented from falling down to the ground by the iron railings. One of the 1000 litre water containers on a stand in the yard toppled over hitting the next stand and burst flooding the yard and we were sitting on top of a big puddle. It was good that the judo mats had been left down because we had somewhere dry to sit, spend the afternoon and to sleep that night as no one wanted to go back indoors except to hurriedly grab blankets and pillows. We were so grateful that this happened on a Saturday and the children were not at school. We were all together in the knowledge that everyone was safe, except for the 3 oldest boys who attend a boarding school 10 miles away. It was 2 days before we heard they we safe and coming home as soon as possible. Their school was damaged, a building collapsed and one boy killed by falling bricks, another very seriously injured. Another 2 days later the 3 boys arrived home & this family of 36 children were all together again 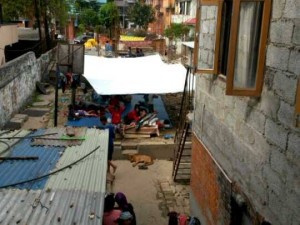 fixed up a shelter from the sun. The builder came and wanted it back but relented when he was asked if he would take it from these poor children who had nowhere to live. It did not protect us from the rain though as it was full of small holes and not big enough to cover everyone or stop the bedding getting wet. It rained two nights running just as everyone got settled and we had to carry sleeping little ones into the two story small annex building where they could get out of quickly if there was another earthquake. We were then provided with an awning that arrived in the middle of a storm but the children insisted on putting it up there & then underneath the much smaller tarp. They made an excellent job but it meant we had 10 boys & girls soaked to the skin, which didn’t bother them, they were grinning from ear to ear & so happy with the new tent.  We soon discovered it was only meant for fine weather and in heavy rain it became saturated and dripped onto the bedding.  A few days later we were provided with a huge plastic sheet that was put on top of the other two and they lived under this shelter for 6 weeks.

I stayed with them for 10 days only going back to my hotel every day or two to shower and change. After 4 nights back in my hotel room the second earthquake struck. Some children were in the tent, others in the boys dorm watching tv and I was with some of the board members in the office in the old building that was cracked but we had been getting confidence back and work had to be done.  The building started shaking and there was the same rumbling sound. We were on the first floor and getting down the stairs was difficult as they were moving under my feet. I stumbled on outside into the yard, my body took ages to settle and stop feeling like it was moving. Like being on a boat in a rough sea. That 2nd one was far worse for me, even though it wasn’t quite as big as the first , because I was indoors this time.

This second quake unnerved the people and made them very afraid. When was there going to be another, would it be bigger than the other two. It will come in 12 days. So much suspicion and fear.

The children didn’t seem to be too bothered, they were afraid but not terrified and life went on. Schools had re-opened 2 days before but now they were closed again and the children soon got bored confined to the small space and it was getting hotter. After 4 days living back with the children I returned to my hotel to sleep &  as the days went by the older boys were sleeping in their dorm & the girls in the store room below, only going back into the condemned building to collect clothes, books etc. 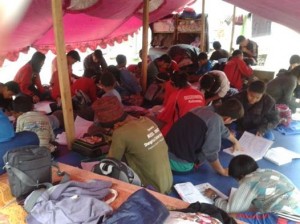 was afraid they would forget everything being off school so long and fail in their next exams. It also gave routine to their days which they mostly spent watching dvd’s. Hindi dvd’s cost 30 rupees each [20p] and good Nepali ones £1.50. I was continually giving them money to get new ones as it was too hot to do much else but lie on their mattresses with the fan on and watch tv.

The did’s were afraid to go into the kitchen and did all the prep work and cooking outside. It isn’t difficult to bring the equipment outside as all food is cooked on 3 calor gas rings, which had to be hurriedly carried under shelter when it rained. Naina the head didi came up with the idea of making a shelter to cook in under the metal steps to the boys room using corrugated sheets. She was so happy with her new kitchen. Life settled into a routine dominated by boredom & heat and we were desperate to get the children into a house before the monsoon started.

A new house had been found a few months previously thanks to the sheer determination of Anne Allen, another long 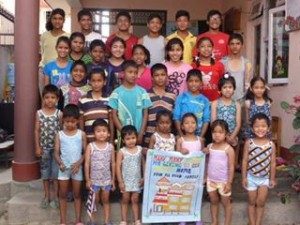 time supporter of the children, and along with Monica Placzek the third member of ‘the team’ we had been raising money to help buy it. The papers for purchasing this house should have been signed on the 26th April but the earthquake put paid to that and they were not signed until the 6th of May. The house was rented by a school, which had been given notice to vacate. We knew we could not complete the purchase until beginning of July at the earliest but as we were desperate to get the children indoors the owner was persuaded to allow Occed to move the children into the house on receipt of a large part payment.

The children slept in their DREAM HOUSE for the first time on Thursday 4th June..

They are camping out on the old mattresses on the ground & first floors while work starts on the upper two. The electrical wiring has been checked and brought up to standard and now painting has begun but already further problems have been discovered

Without the carpets we see that the concrete floors have uneven patches that need levelling before the linoleum can be laid and the edges in the stairs are broken.

The government water pipes in this area have been damaged in the earthquakes and so a borehole needs to be sunk and a pump with storage containers has to be installed. This is common in Kathmandu and there is a good supply of water about 100 to 150 feet down

It will be a long haul to refurbish this 4 storey house with 14 rooms but it will happen due to the generous support and help of former volunteers, family, friends & in some cases strangers.
I leave for home on the 23rd June [a very sad day that will be!], Monica arrives on the 17th for 5 weeks and Anne comes out for two weeks just before Monica leaves so there will be one of us here to see this project through and I’m so happy that Anne will be here for the official opening ceremony as the first thing she said when she saw this house after viewing so many was OUR DREAM HOUSE

I must also mention Anjali, superintendant of the home and special friend to us all.  Her dedication to the children and sheer determination to help Anne find a suitable house has enriched the lives of our godchildren beyond belief. ‘They call us their godmothers, we are honoured with this role & so proud of them all’

If you would like to sponsor a child or help in anyway please email me dot-nepal@hotmail.co.uk