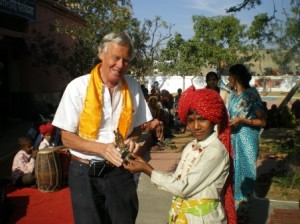 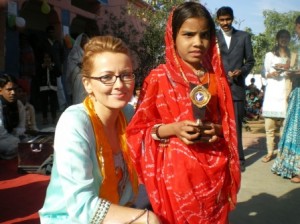 A month’s volunteering assignment this January and February took Nick Leader and Lorraine O’Neill into deepest Rajasthan, India.  This was to be people and places first foray into India and although Sallie had paid a visit to the school and Kate had managed to extract some information from the Headmaster and Ibex, our Project Management Team in Delhi, we were the trailblazers charged with reporting back about the general English Language teaching situation in the school to further volunteers coming out after us.

Our main objectives were to teach classroom English, help improve teachers’ level of English and to suggest new methodological approaches through the use of material we took with us.

The school itself, Chitardai Upper Primary School, 7 kms from the nearest big village of Deogarh, is in a remote rural area of India approximately half way between Jaipur and Udaipur. Reading the description of the school for 150 children aged between six and fourteen from families nearly all of whom were classified as below the official poverty level, we were struck by the Headmaster’s mantra of “learning through play”. What better material to take with us, Nick thought, than the English in Action Primary course books, Climbers, Trekkers, Explorers and Rangers kindly offered by the college in Canterbury, for which he works. He loaded 35 kgs of pupils’ books, teachers’ books, laminated flashcards, CD of children’s songs onto a Jet Airways flight to Delhi.

Volunteering does not necessarily entail slumming it in doss house accommodation, living with a local economically poor family or in a dormitory with a crowd of teenagers. Nick and Lorraine (Lola) were luxuriously housed in the palatial local Mahal (palace), where the present owners are charitable supporters of Chitardai and a number of other primary schools. A twenty minute drive by jeep over bumpy country roads prepared us for the day ahead. We arrived at 10.30 to the sight of school children seated in rows in the shade of the neap tree in the courtyard taking part in the morning assembly. All were neatly turned out in uniform, despite a walk for some of them to school of up to 5 kms, hence the late starting time.

Then the serious work began.  We soon discovered that the Indian teachers’ knowledge of English was fairly limited, whilst the children could only repeat what they heard, or recite English phrases which had been learnt by rote. Our communicative English in Action material proved invaluable, both for the children and for ideas on methodology for the teachers. By the end of the month we had progressed through both Climbers books and well into Trekkers with the older classes. The hot weather took us out of the classroom for games such as “What’s the time Mr. Wolf?” and “Simon Says”, while the CD player, which we had bought in Delhi for the school and children were belting out such favourites as “Old Macdonald”, “Ten Green Bottles”, “If you’re happy and you know it” and “The wheels on the bus” for an audience of cows, sheep and goats straying into the courtyard in search of food. Lorraine took herself off to Udaipur one weekend and very generously bought a printer for the school and a whole lot of equipment and toys for the crèche next door.

By 4.30 we were all getting tired and needed some fresh air. We had bought cricket stumps, bails, bats and balls locally and these were seized on by the boys, whilst the girls discovered the fun of playing Frisbee and being encouraged to chase around on the playing field, an activity they had NEVER engaged in before.

We enjoyed meeting visitors to the Mahal in the evening and sitting around the brazier in the courtyard with the royal family. Several tourists visited the school out of interest to see what we were doing and to meet the children. On one occasion, to ease the situation in class for our pupils, I asked two of the better students to ask one visiting couple a few questions about themselves. Arriving at the school by air conditioned car and dressed immaculately, they gave the class the impression of being wealthy white people from an exotic country beyond their comprehension. With the children’s take on wealth as it was, the questions went as follows: 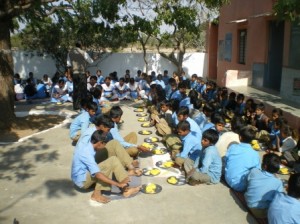 “How many cows do you have?”

Answer from a slightly bewildered visitor:

“Well, actually, I don’t have any cows.”

Class seemed satisfied with that answer, many of them not having any cows themselves. Next question:

“ How many goats have you got?”

Answer as before, “well actually I don’t have any goats.”

” How many sheep have you got?”

Answer a bit more expansive this time. “Well, we live in the country in Yorkshire where there a lot of sheep, but actually I don’t have any sheep myself.”

By this time a very worried class were writing down-sheep nought. Obviously very concerned about their visitors’ conspicuous lack of livestock, the pupils were still wondering how these poverty stricken visitors could afford to come to India, when the lesson finished and rich and poor all went out to play cricket and Frisbee.

After three and a half weeks, a final farewell presentation provided an opportunity for each class to entertain visitors ranging from the local “Royal Family”, local Department of Education chiefs, the Press, teachers, parents and fathers in their turbans and dhotis and mothers in colourful saris. Short sketches, songs and games in English and Indian dances and music, and then the jeep arrived to take us back to Deogarh and our final journey home.

With the children’s shouts of “No go Mr Nick and Miss Lola, stay here!” ringing in our ears it was lucky that we both had sunglasses and scarves around our heads, ostensibly to shield us from the sun and dust, but really more effective to hide the tears in our eyes. We were glad that Dianne and Jenny were taking over from us as the next wave of volunteers, followed by Bob and Penny Wolfson, so that the head of steam that we had hopefully built up would be continued.

An unforgettable experience for us both and hopefully for the teachers and children. And thanks again to my Canterbury College and everyone involved for the material they produced, which I know will be used time and time again, and for years to come, by future volunteers and the teachers in this poor, remote corner of the Indian subcontinent.