Nigel has been volunteering with us, using his practical skills, for 8 years! Here is his story … by him …

and yes you may have spotted … 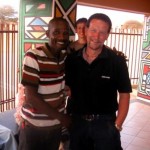 Nigel is also editor of our volunteer newsletter

I first volunteered with people and places in Mapoch a rural village in South Africa during August 2007 where I helped set up a bicycle project.

This was the first time I had volunteered abroad; I read about people and places in a newspaper article and thought I would give them a try. After speaking to Kate Stefanko the placement director I was very impressed with the way people and places went about their business, all of my questions were answered and I felt confident that Mapoch was the right place for me to volunteer.

I was especially impressed by fact that I knew where my money would be going, that I would have a say in what my project donation would be used for and that I didn’t have to pay any money up front until my placement was confirmed, none of this “oh well if you make a deposit of £130 we can reserve you a place on the project, as it is filling up quickly” and trust me I have heard this from other companies!

“The secret of volunteering is to find the right company, ask loads of questions such as where my money goes. Does the local community want me there and am I doing what they want, am I doing a job that could be done by a local (no point being there if it could) and any responsible company will insist on a DBS check as in most circumstances you will come into contact with children, I need it in my job as a school site manager in England so why wouldn’t I need it abroad!” 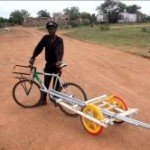 To say I was nervous about going to South Africa on my own is an understatement! But it all worked out OK and we managed to introduce bicycles in to an economically poor community with little access to their own transport. I helped build a prototype cycle trailer with village elder Peter which a villager David started to use for his delivery business, we turned  Peter`s veggie shop into a cycle sales and repair shop and we eventually had a container of 321 second-hand bicycles shipped from Re-Cycle in England to Mapoch.

click read more to learn about my time in the gambia and Peru – VERY different experiences!

The container shipment was paid for by another people and places volunteer who was at Mapoch during my stay and we then raised enough money to buy the container as a store and workshop. 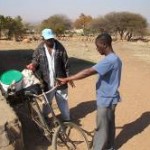 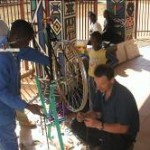 It’s fair to say that volunteering changed my life, I left Mapoch with a heavy heart but a feeling of self worth and a belief in what I could achieve, when I went to Mapoch I was Caretaker of a High school, now I am Site manager of the High school as well as a Primary school. To say I achieved this solely because of my volunteering experience would be stretching it but it certainly helped!

I was bitten by the volunteering bug and in 2011 I volunteered in The Gambia on a farm project , we also relocated three chicken sheds with GIG (Gambia Is Good), the politics of working in the Gambia were difficult and things did not always go as planned but hey that’s volunteering, rarely ever does it go as planned!

Whilst there part of my project donation paid for a local lad called Musa to help me with work on the farm. With the help of the local community we built a bio gas installation to turn rotting mangos into gas for the kitchen cooker and we cleaned up and tiled the kitchen floor and work surfaces, and the three chicken sheds were placed on a purpose built termite proof base.

One of the most touching things I heard was repeated to me by Kaddy the farm secretary. She told me that her mother said “It`s nice to have a white man working here as it shows he cares” so maybe the local community got to see a Toubab (white man) as something other than just a tourist.

I was beginning to learn that a volunteer can do more than pass on their skills and life experiences, maybe by working with the local communities we can show how much we care and learn so much in return. 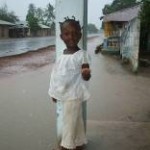 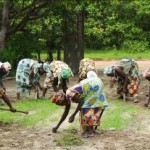 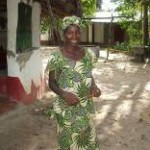 So my next adventure and it was an adventure! I spent a month working on a conservation project in the Amazon rainforest in Peru, getting there entailed an epic journey of 35 hours from Norwich to Cusco and after 2 days in Cusco the best part of a day on a mini bus travelling along dirt roads up through the mountains to spend the night staying at a lodge in the cloud forest.

The next day was an early start at 6am along dirt roads again to finally reach the Madre de Rios River and then a three hour journey to finally arrive at the Manu learning centre in the heart of the rainforest, a more spectacular place it would be hard to find. 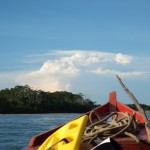 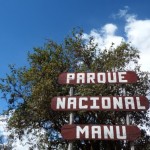 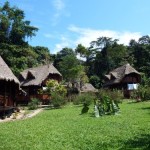 Most of my time was spent slogging through a jungle collecting data on types and numbers of animals that were present in regenerated rainforest to see what impact logging had on the environment and how well it can recover.

I also spent some time working with other volunteers on building bio gardens in the nearest town of Salvacion, the Peruvian diet is not the best in the world and if they can be helped to grow their own fruit and vegetables it can only help their diet and allow them to grow food more cheaply.

Sometime was also spent staying at Shipetairi doing animal research in a different part of the jungle and one day we all played a football match against the local community which was a great way of introducing ourselves and building a rapport with the community as they are working towards introducing some tourism in the area.
When I first volunteered I thought I would try to help people who had less than I did, I have since discovered that they helped me as well and I left South Africa , The Gambia and Peru with a lot more than I went with.

I think that volunteering is a wonderful way to see the world and understand the problems that people have to deal with, much better than lying on a beach getting a sun tan, although I did a bit of that in The Gambia!

The secret of volunteering is to find the right company, ask loads of questions such as where my money goes. Does the local community want me there and am I doing what they want, am I doing a job that could be done by a local (no point being there if it could) and any responsible company will insist on a DBS check as in most circumstances you will come into contact with children, I need it in my job as a school site manager in England so why wouldn’t I need it abroad!

When time and funds permit I will volunteer again, in fact I will continue to do so until they stick me in a wooden box!