Why support The Calabash Trust?

The Calabash Trust is based in Port Elizabeth and channels support from Tourism into sustainable development in disadvantaged communities within and around Port Elizabeth.  Through Face Africa I have been fortunate to be involved with Calabash for a number of years and have borne witness to some of the amazing achievements this NGO has made happen in these communities.  We have been a small part of some of these achievements and our aim with supporting Calabash through our Kili Climb is to provide financial support to ensure the continuation of this work.

And now the climb –

I spent several years tour leading through East Africa, passing under the shadow of Africa’s highest mountain and the world’s highest free-standing mountain.  Sometimes she showed herself clearly, snow-capped peak soaring majestically above the savannah plains below. More often than not she remained mysterious, shrouded in cloud, allowing us the occasional peak as we trundled through Kenya to Tanzania and beyond.  Despite all this time in the vicinity of Kilimanjaro, I never found myself with enough time to have a go at the climb, to test the upper reaches of oxygen security en route to Uhuru Peak – almost six thousand metres above sea level.

The year 2011 finds me in East Africa again, running one of our Face Africa school expeditions to Uganda at the end of July.  Contemplating this, and with no pressing need to return home quickly afterwards, I acknowledged the old familiar stir within me. Adventure. Challenge. Hmmm… Why not? Maybe the time is right to finally attempt Africa’s tallest test.

Having decided to make the attempt, it was time to see who was keen to join me.  I put the word out on the wires, and waited.

For Stephanie, it dovetailed perfectly. She successfully applied to Vodafone’s World of Difference programme and has received funding to run a project for The Great Football Giveaway in Tanzania.  The end of that project coincided with the start of the climb and it seemed the perfect way to end off her time in Tanzania.

Stuart signed up quickly.  A recent father, I was surprised that he needed another huge challenge so quickly, but soon realised the strength that this determined quietly-spoken man would bring to the team.

A couple of years ago, Harry quit the fast pace of the City to pursue his dream as a golf professional.  We’re not quite sure how far he will be able to drive a golf ball off Uhuru Peak, but are excited that he’s going to try!  The youngest member of the team, Harry is relied upon for his enthusiasm and drive.

Linky heard about the climb from Steph and made it happen very quickly.  A resolute individual, she began her training by giving up alcohol and cigarettes.  Linky will be providing the energy to keep us going when the going gets tough…

Joris used to live in Tanzania and continues to run a safari company there from his new base in Cape Town.  He is the only climber to have ascended Kili successfully before, so we rely on him for that experience.  A positive character with a ready smile, he will be keeping us entertained all the way up.

August is a popular time of year for would-be climbers to attempt Kilimanjaro, so we were keen to avoid the well-worn trails.  The Lemosho Route is an unspoilt, remote, little-used and beautiful way up to the Shira Plateau.  The trail leads up to the western edge of the Shira Plateau, and the hike across the plateau is said to be one of the most stunningly beautiful hikes in Africa.  We will be accompanied by a team of guides, porters and a cook who will be transporting our mobile camp for the full seven nights that we will spend on the mountain.

The primary challenge on any attempt at Kili is dealing with the altitude.  As you ascend, the levels of oxygen in the air become less and the effort of any activity becomes proportionally more difficult. In addition to this individuals can develop the more serious symptoms of Acute Mountain Sickness which include headaches, nausea, lethargy and can lead to serious and dangerous consequences if not recognised and dealt with.  Acclimatisation is key to a successful and safe climb, as are experienced guides.  The team at Wild Frontiers that will be leading and supporting us have been running Kili climbs for years and we place our trust in them, as well as in each other.  The final day requires 18 hours of hiking above 5,000m in temperatures well below freezing and potential 70mph winds with little oxygen to sustain the activity. This is where we will be tested, and where we must come through.

Why support The Calabash Trust?

The Calabash Trust is based in Port Elizabeth and channels support from Tourism into sustainable development in disadvantaged communities within and around Port Elizabeth.  Through Face Africa I have been fortunate to be involved with Calabash for a number of years and have borne witness to some of the amazing achievements this NGO has made happen in these communities.  We have been a small part of some of these achievements and our aim with supporting Calabash through our Kili Climb is to provide financial support to ensure the continuation of this work.

All of the money raised in the name of this Climb will be going directly to the Calabash Trust.  Each of the climbers are paying all of their expenses in full, meaning that every penny you donate will go towards supporting Calabash and their work.

You can donate online here through TravelPledge

P.S. from Sallie – we are delighted that we are able to help Tim with his fundraising efforts for Calabash through TravelPledge. Those of you that have been to Port Elizabeth know what a worthwhile charity Calabash is – to learn more about people and places relationship with TravelPledge click here

If you need any more information please don’t hesitate to contact me at  sallie@travel-peopleandplaces.co.uk 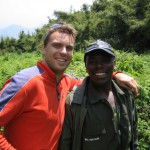