Everyone here has been complaining about the lack of rain as the farmers need it desperately and I said don`t worry I start work on Monday so it will rain then, guess what? It has started raining!!
Not heavy African rain just a few showers but as Musa my helper (more on him later) had started on digging a hole for the bio-gas installation it was a pain.

We had marked out the hole for a large plastic tank that has to be sunk into the ground and stared digging when it rained so we took a break but when we tried again the clay soil was too heavy to dig so we left it. There should be two men digging the hole for us but they did not turn up so we made a start, hopefully they will be here tomorrow.
Before we could start the hole we had to extract the plastic tank from a 20 foot long container and wouldn`t you know it, it was buried at the back, so by the time we had removed it and another tank plus tools an hour had gone by and I had lost about 5 litres in sweat!
Musa is a young lad of 27 and he lives with his Auntie as his father died when he was one year old and his Mother died when he was fourteen. He worked at the previous GIG farmyard and my volunteer donation is paying for his wages so that he can help me whilst I am here and also his accommodation so that he can be near work.

Musa is the expert on Bio-Gas installations as he did one at the last farm so in reality I am the helper!! 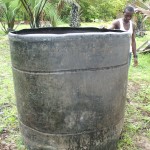 He is a very nice lad and a hard worker, which is all the more surprising as for Muslims Ramadan started today and this means no food or water till this evening, they cannot even swallow their own saliva.

So tomorrow we carry on where we left off, hopefully with some men to dig the hole and no rain.