As you will know, there are two connecting strands to the work

people and places does.  We send volunteers on placements where their skills and experience have been carefully matched to local needs, and we campaign for responsible practice in volunteer tourism – and both these categories have been reflected in awards people and places have won, for Best Volunteer Organisation and

Up until now I have preferred to focus my time and energy on the volunteering side of things, helping our local partners identify needs and helping to prepare volunteers to do their bit to meet these needs.  I have not wanted to get involved in the campaigning side of our work as I am personally uncomfortable with the rather negative and critical connotations of some forms of campaigning (not necessarily ours) and I prefer to focus on the positives of trying to make our volunteer placements as successful as possible for all concerned.  However I have always taken an interest in the issues raised through our campaigning, particularly those involving children and child protection.  I have therefore followed with interest all the publicity around the negative impact of volunteers working in, and foreigners supporting, children in orphanages.  One of the articles published as part of a recent ‘blogging blitz’ on the dangers of orphanage tourism really made me think.  The writer of the article was talking specifically about student volunteers going to orphanages as part of a gap year experience, and he made the point that we are wrong to criticise these young people for taking part in a misguided form of volunteering because we have never taught them that it’s an inappropriate thing to do.  As a teacher that really struck a chord, and fits in exactly with my views – I don’t want to criticise bad practice but I do want to raise awareness about what some of the issues are and how to make good choices when volunteering or supporting people in developing countries.

In fact, having once thought this, I now feel it would be irresponsible of me to know something about the issues and not to spread the word.

“The challenge is certainly not to stop supporting children in developing countries – the need has not decreased – but to make sure we are doing this in ways that genuinely help and are not designed simply to make us feel good – and that requires real thought.”

The group I decided to start with is my local church.  They have always taken an interest in the volunteering work I do, and although none of them are going to go volunteering themselves many of them do support charities and organisations abroad, including orphanages – in fact I believe I have read that the biggest donors to orphanages are churches.  So I wrote the letter reproduced below for my church magazine.  I was quite nervous about writing it, fearing I would offend really well-meaning people who would think I was criticising the charities they choose to support.  In fact I have had a really positive response, with a number of people thanking me for opening their eyes to issues they had no idea about and saying how much better informed they now feel.  Several have asked me for an electronic copy of the article so they can edit it and pass it on to other people.

So I am wondering whether any of you feel you could do the same.  Maybe you attend a church or belong to another group you think should know about these issues.  Currently two groups of people are being exploited – children placed in orphanages for the economic gain of the people who place them there, and well-meaning people here who donate the  money and volunteer time  that keeps them going.  By telling people about these issues before they choose to donate we can help to stop this exploitation.

It’s a year now since I last wrote something for the magazine about the volunteering work I do with people and places – so time to bring you up to date!  My next trip will be  to Cambodia.  In Cambodia I will be visiting two community centres in Siem Reap – we place volunteers at both of these centres to work with families from some of the poorest local communities.

I have also been expanding the work I do in this country to raise awareness of some of the issues pertinent to this volunteering work.  I am regularly asked to speak at a variety of local meetings such as church groups, local WIs etc, and I’m currently widening this to include work with local schools and with the local branch of Save the Children.

supporting children in developing countries, particularly children in orphanages.  I have learned so much I did not know before about the potential dangers of this kind of work, as well as the benefits, and I’m going to share some of that information with you here – so, before you read on, here’s the health warning – I intend this article to be thought-provoking!

The community centres we support in Cambodia have been set up specifically to help families from these very poor communities keep their children with them at home.  In the Far East in recent years, as in many developing countries, a large number of orphanages have been founded with the apparent aim of giving ‘orphans’ a better life.  However  research shows a link to a paper that orphanages / children’s homes are not the best place for children to grow up – children thrive in families.

In our country for many years now there have been no children’s homes; children unable to remain with their birth family for whatever reason are placed with foster families and/or are adopted.  Children who grow up in institutions become institutionalised and frequently find it hard to function in society when they become adults, and we all know from stories in the media that there have been many cases of children in residential care being abused.

You will be as shocked as I was to learn that 80% of children in orphanages around the world are not orphans.  So how do they end up in orphanages?

Some are trafficked, some are sold by desperate families who simply have no money.  Many are given to the orphanages by their families who are told that in an orphanage their child will have a better life because they will receive funding from international donors, and maybe international volunteers will come who will teach them English and bring them gifts and money.  In the past some have been the result of deliberate government policy, as in Romania in the 1980s.  Some of course are genuine orphans – life expectancy is lower in the developing world and in southern Africa in particular AIDS has left many children orphaned; however in most developing countries family responsibility is seen as more important than it is in our own culture, and the majority of genuine orphans are cared for by other family members such as grandparents, or by other friends in their community.  Most orphanages exist in parts of the world where international tourists go – as tourism develops so the number of orphanages grows.

And who supports these orphanages?  There are three main categories of funding, all originating in countries such as ours.  One source is volunteers, who pay to go and volunteer in an orphanage and bring funding with them.  There are some volunteering companies (people and places is one of them) who do not place volunteers in orphanages, but many still do because it is a popular choice among volunteers who have not thought through the implications of what they are doing.  There are some countries where the government is working hard to set up community-based care systems for children and where it is illegal to open new orphanages or children’s homes, but the orphanages still exist because of the demands for placements from companies who send international volunteers.  One thing I shall be doing in Cambodia is meeting with representatives from an international charity to begin to draw up a code of conduct for people sending volunteers to work with children abroad, but this will be a long process. 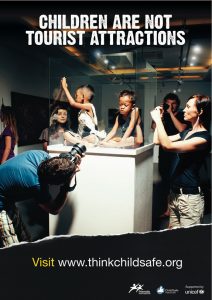 a visit to an orphanage– tourists are shown round the orphanage, children are made to tell their sad life stories to the tourists and the hat is passed round for donations.  In the worst case scenarios the money does not go to support the children at all (after all if the children look well fed and happy donations won’t be so high) but is kept by the orphanage owners as income, with the tour guide taking a cut.

And the third source of funding for orphanages is well meaning people such as ourselves, who are only too willing to give to what sounds like a really good cause.  Some of the biggest donors to orphanages are churches, where people see it as a way of fulfilling their Christian duty to support the needy.

So what can we learn from this?  I have learned to ask questions.  In the past I have certainly given money to people raising money for an orphanage.  Now I would want to know why those children are in an orphanage and what moves the people running the orphanage are taking to get the children back into families within their community.  There are obviously some well-run orphanages for genuine orphans where the children are looked after well in what is in effect a large family – but I have learned to be cautious.

If I were on holiday and someone tried to take me to an orphanage I would refuse to go and would explain why – I did this when I was in Kenya – people don’t necessarily understand why you are refusing but the word is starting to get out there and we have to start somewhere.

I have learned to use as a benchmark what would be acceptable in our own country – to think how we would feel if a coach-load of tourists turned up at, for example, a playgroup and expected to come in, cuddle the children and take photographs of them.  If it’s not acceptable here (and of course it’s not), it’s not acceptable in a developing country – children are not tourist attractions and should never be treated as such.

And in the past, given the choice between giving money to an orphanage or to some sort of community-based project, whether that be a school, a community centre or a charity supporting needy families I would almost certainly have chosen the orphanage because it would have sounded like the most worthwhile cause.  Now without a doubt I would give to the community project, and I would encourage you to do the same.

The challenge is certainly not to stop supporting children in developing countries – the need has not decreased – but to make sure we are doing this in ways that genuinely help and are not designed simply to make us feel good – and that requires real thought.