The title refers to Kausu Sanneh who I spoke to at the GIG farmyard today, Musa is staying in his compound while he works with me.
Kausu is referred to as Pa Kausu because he is an older man, his youngest child is one year old and the oldest is thirty years old, don`t know his age but with two wives and fifteen kids he doesn’t look whatever age he is!

I asked if he had a TV and he does but the electrical supply is bad around here so if there is no TV I think he has other things to do!

When he found out I had no wife or kids he offered to find me a wife before I return to England but I politely declined!

Today I, Musa, Buda and Kausu dug another hole for the tank that will hold the gas and we dug small trenches to lay the pipes in. There wasn`t anything else we could do today as we are waiting for delivery of some cement and piping, let’s hope it`s here tomorrow. 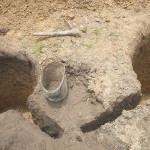 Today (Wednesday) is the day that the local farmers come to work at the GIG farmyard, most of them are women and they look stunning in there brightly coloured clothing, I don`t know how they do it as I look a wreck in this heat. One lady on leaving strapped her baby to her back with a cloth picked up a bundle of fire wood and then a bucket and strolled off balancing the wood on her head!
Frankly African women make men look like wimps, bet Sallie will love that one!

Spent quite a bit of time talking to the ladies, a few of whom speak English, one greeted me in Mandinka and I said the same back to her, with each word she said I repeated it, I got away with it for a while until she asked my name and I said the same thing at which point everyone laughed!

Languages are not my strong point and with two main languages here, Mandinka and Wolof which language to speak to whom is giving me a headache! But it`s mostly Mandinka and Salaam Aleikum which in Arabic means “peace be with you seems to work with everyone.