It was the year 2005 when I discovered the joys of Nepal, as well as something of its poverty. Several members of my group of “wrinklies” happened to have a work background in education as I had, and we paid a very brief visit to a rural school. What a contrast to the well-endowed establishments we were familiar with! But the staff and the children were delightful, and made quite an impression on us.

When I read about opportunities for volunteers to work in schools abroad, including Nepal, I saw a chance for me to offer some of my experience to a country which was struggling.

Through the excellent people and places organisation I was accepted as a volunteer and in September 2008 assigned to a four week placement in a school in Kathmandu. I elected to stay in a hotel, as I was of an age to value my own space and a degree of independence, but could have had a home stay as an alternative.

The school was a shock, with class sizes up to 60 pupils, no electricity, no resources, and at that time, no staff facilities. But although it was hard work, the rewards were many. The smiling faces of the pupils; their delight in learning; their willingness to try new activities – all these were powerful antidotes to the dimness of the classrooms and the dust of the school environment. read about this project here

I was sorry when my time there ended, but I felt that I had maybe made a small contribution to the skills of the local teachers and therefore the education of the pupils, as well as seeing something of life away from the tourist areas of Kathmandu. I had also discovered things about myself – that I could still teach; that I could get by in a culture very different from my own; that even at nearly 70 years old, I was not yet useless, and that I still had a contribution to make.

Two years later, I decided to volunteer again, hoping to return to Nepal some time during 2011. Once more I turned to my lovely friends at people and places who arranged another four-week placement for me, this time at a very different school, and in very different surroundings. A small, rural school, near Pokhara, but serving village communities where semi-subsistence farming is how most people live; where children walk literally miles each day to get to school; where every drop of water has to be carried; where children have no toys. Yet here again, the children are a delight, and staff and other adults, although naturally shy and reticent, are welcoming and helpful, and when the ice is broken, warm and generous. My accommodation was again in a comfortable hotel. 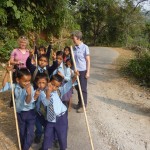 At this school we (on this occasion I was not alone) were asked to focus on helping the teachers of the primary school pupils to improve the standard of their English language skills, and also to encourage them to try out more creative and imaginative ways of teaching. This was a great challenge as we had no resources except the book which forms the curriculum, a few books left by previous volunteers, and our own imaginations! There were small successes – one teacher went outside to gather pebbles which he then used for number work; another teacher borrowed a large pack of felt-tipped pens to teach the four-times table; they began to put posters on the classroom walls and watched creative activities such as drawing and hand-painting. The joy of the pupils was an enormous encouragement, and how we all laughed at our feeble attempts to speak Nepali!

We felt often that our achievements were puny in comparison with what still need to be done, but we had to remind ourselves that we only see what happens during our time on the project, and can’t know what the long view will be. All we could do was what we could, offer what expertise and experience we had and hope that the seeds we had tried to plant would be nurtured and brought to fruition – I knew from previous experience that people and places would send volunteers after us to build on our work. read  more about this project here

We, in this country, have received much and enjoy many privileges which we sometimes take for granted. It is very sobering  to see what little other people have, and the hardships they endure. Yet we all share the same humanity, so if anyone out there has some experience they are willing to share, volunteering is an excellent way of doing it.

Evelyn Alexander first volunteered with people and places in 2008 on this project and then again in November 2011 on this project. Evelyn trained and worked as a teacher and when she retired she was a senior education manager responsible for primary and nursery schools in Cumbria. Watch a short video of her in Nepal in November.

This article first appeared on www.silvertraveladvisor.com