Volunteers Danielle and Laurel have been talking with each other a lot recently … Danielle had already returned from her placement in Emmanuel, and Laurel was preparing to go – you may already have watched Danielle’s interview … and here’s Laurel’s too from our volunteers’ get-together in Faversham last month … 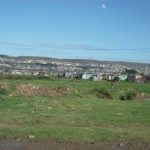 … well, Laurel has now arrived in Port Elizabeth … here are her first impressions

After a day and a half of travelling I finally arrived in Port Elizabeth- knackered but in high spirits. I was taken straight from the airport to an orientation meeting with my project manager, Paul, who told me that Port Elizabeth is truly a city of two halves. So far all that I had seen was the modern airport, the freeway, the well-manicured hotels by the beach and of course the odd Nando’s, McDonald’s and KFC (jokingly dubbed ‘the American Embassy’ by my host). 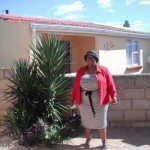 The house in which I am staying is comfortable- it is owned by Miki who is a schoolteacher and although it is in a township, New Brighton (named after Brighton in England) Miki has a flat-screen TV and a fridge with an ice-dispenser. 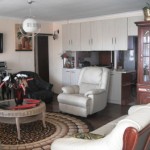 Consequently, it was not until my second day that I would have the chance to realise what Paul meant.

I was given a tour of the city, providing an invaluable opportunity to learn about its people and history. We started on the freeway and passed Greenacres, one of the largest malls in South Africa. Most black people do not shop there, Xolani told us; the prices are too expensive and getting there entails paying the bus fare to and from the townships. He then proceeded to show us the market on the outskirts of the townships, where the prices are more affordable and it’s possible to bargain. The roads are dusty and the air is filled with the faint smell of smoke. On street corners women are cooking ‘smileys’. Xolani tells me they are a township delicacy and he will buy me one before I leave. I nod appreciatively, envisaging the smiley face potato waffles that we have at home, before he informs me that they are a sheep’s head, which is burned in hot fire so that its skin becomes taught and its teeth poke out; hence it appears to be ‘smiling’. The contrast between this area and the freeway and the mall is stark and despite Xolani telling us that his life is 90% better since 1994 and the end of apartheid, the city remains somewhat segregated. Indeed Xolani tells us that white people would not shop at the market at the edge of the townships because they would consider this to be lowering their standards.

As we drive past more townships Xolani points out the former buffer zones, large open spaces that could not be built upon because they served to separate one community from another. The plan now is to build clinics on them. As we pass into the townships the houses become smaller, some are just 20m² and those built of concrete are interspersed with shacks- ramshackle shelters built of wood and corrugated iron, which are freezing in the winter and boiling in the summer. Many do not have running water, electricity or toilets- families must make do with a bucket, which is collected by the municipality just once a week. 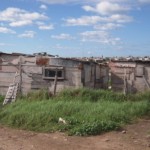 Of course in such conditions disease is rife and it is exacerbated by malnutrition. Of Port Elizabeth’s 1.5 million population, around 500,000 people live in townships. The government have announced an objective that everyone in South Africa should be housed in concrete homes by 2030 and there is evidence of construction, although I am told that the government remains corrupt and it is unlikely that it will reach this target. Interestingly, all of the houses are single-storey, we pass a cluster of double-storey houses, which Xolani tells us were built as an experiment, but no-one wanted to live there because people want low houses with yards for holding ceremonies. The townships are also littered with waste; bottles, cans, cartons and colourful plastic bags- named ‘township daisies’ by Xolani, which blow far and wide in the wind. There are women collecting the bags who have been employed by the council, although if they are not collected quickly cows and dogs tear them and the women’s work is doubled. In the townships, there is 60% unemployment and Xolani describes the sick, disabled and elderly as the breadwinners of many families, due to the fact that they receive very small social grants. 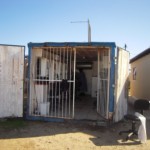 Many unemployed people are trying to found their own businesses- there are car wash signs and arts and crafts being sold and there appears to be a different ‘hair salon’ every fifty metres or so. These are containers with price lists painted on them and most seem to be closed. The tour ended with a visit to Emmanuel, the care and advice centre at which I am working. I was greeted with big hugs and smiles from the carers and crèche children, who held out their hands for me to do ‘round and round the garden’ and called me ‘mam’. This is something that I am yet to get used to, along with the emphasis placed upon the colour of my skin. Under apartheid, people were categorised as white, coloured, Asian or black and these classifications still hold strong connotations in South Africa today. I find it very odd being described as ‘white’, because I am not white, but this is largely irrelevant because my skin is fairly light and in relative terms I am wealthy. Moreover, I do not fit easily into the ‘coloured’ category because I cannot speak Afrikans. Paul informed me that there is still a perception among some black people that ‘white is right’; hence often volunteers are asked to tell people to take there Antiretroviral drugs (which keep the levels of HIV in the body at a low level enabling the immune system to work effectively) because people are more likely to listen to them than the carers. This is another notion that I find difficult to comprehend.

I was pleased to finally be at Emmanuel, since I had heard so much about the centre and was eager to meet the group of teenagers (who are orphans and vulnerable children and are thus described as the OVCs) that I would be working with. Emmanuel is in the middle of a township called KwaNoxolo and it is smaller than I had anticipated- it consists of a yard, two wendy houses (one for the crèche children and one for the teenagers) a toilet building, a kitchen and a small container which constitutes the office. The carers are all very warm and they are doing their best for the community in very difficult conditions- they have not been paid by the Department of Social Development in over 10 months. The OVCs are bright and welcoming and I talked to them about their aspirations- one wants to be an actress, another a teacher and another a barrister.