We love how our volunteers keep in touch with eachother ( and us!) . 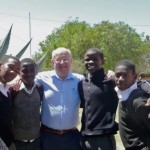 Thought I would let you know how I got in at Tshume as you were so kind as to give me some advice before I went. That advice was most useful so thanks very much. This is a preliminary account prior to the official one for P and P.

To sum up, it was a wonderful experience that has had a profound effect on the way I look at things. It is a rare privilege to have the opportunity to have a better understanding of a culture and its people. In all my travels I have never done this before.

Organisation, arrangements and support from Kate and Paul were faultless, as usual. Anthea looked after me at the 5th Avenue Beach House where I was very comfortable indeed. I would recommend it to anyone for accommodation.  Xolani, my driver. was always on time and most friendly. I finally managed to pronounce his name correctly with the click. I also met the lovely Nelson.

Mr Sali, Rita, Zozo and Leo made me most welcome and all the staff were all really friendly. They made a fuss of me. Even though sometimes things seem a bit casual to our western eyes they never forgot my tea and coffee and refused to let me make my own.  They once caught me washing up in the Staff Room and found it quite hilarious. A man washing up! I loved the morning sing but could not join in much as the language is so difficult for us.

I cannot say enough about the children. After a little natural shyness at this strange white man, they soon took me into their hearts. Unfailingly polite, respectful  and well behaved, mostly hard working and ambitious and  funny, they could teach UK kids a bit about how to behave. I mostly taught Grade 9 (15/16) which contained what Rita called ‘silly boys’ but that just meant they were funny and mischievous – one quiet word from me and they were instantly back in line – not a hint of confrontation, or insolence – how refreshing! I also taught Grade 7 and 8 who were equally delightful but a little more reserved.

The Drama was fun and Zozo and I ‘team taught’ which was ideal. She is such a vivacious and lively person.

On 4 afternoons I took small groups into the library to assess and work on their poor reading skills. Most of the problems were to do with a lack of phonics or word recognition. I wrote a report on each child and left it with the school. I am not naive enough to think that anything much will happen – there are no support resources but at least they know there are serious problems with some14 year olds who simply cannot read either in English or Xhosa. Actually most of the children I taught spoke good English and read quite well.

The library is in good condition and well kept and children were using it for assignment work. I still think it could be used more.

To Western eyes things seemed very casual. Lesson times were not really adhered to and sometimes the children had not the remotest idea where they were going next or what subject. On a number of occasions the school closed early for meetings and other things. On Friday afternoons school effectively finished at lunch time as the children cleaned the school during period 5 and then went home at 1.00 pm. In spite of this, the school is not chaotic. Mr Sali has a firm grip on the things that matter and he is totally dedicated to making his school better.

My farewell ceremony was almost too much to bear. I have never been hugged so much. The children made speeches and when they said they loved me, I really think they meant it. What finally nearly reduced me to a sobbing wreck was when the choir sung for me. 60 strong with 15 year old baritones and bases, their 5 part harmony of African songs makes the hair on the back of your head stand up. They even, at their request, devised and performed a piece of Drama for me.

.As we all know, any effect one volunteer has at the school is a small step on a long road. I hope I made a difference in some way but for me it was one of the best experiences of my life. Tshume has a place in my heart for ever. I hope that one day I can go back.