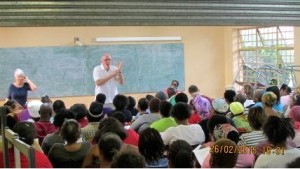 So, did you have a good holiday?  You were away for quite a time weren’t you?

– South Africa.  You went to South Africa, didn’t you?  Garden route?  My wife and I did that a couple of years ago.  Very beautiful.  Did you start at Cape Town or Port Elizabeth?

– We were in Port Elizabeth.

– Yes, worth a brief stopover before you take to the road, I suppose.

– How come?  What do you mean?  You stayed there for five weeks?  What was the problem?

– No problem at all.  On the contrary, PE is a fantastic place to stay.  I was trying to tell you.  We weren’t exactly on holiday…. We were working.

– Working?  I thought you had retired a long time ago.

– Yes, but we decided to come out of retirement for a special project.

–   Well, we were teaching in a township school….

This dialogue, partly imagined, partly real, is the kind of normal post-holiday chit-chat that we have engaged in frequently since our return from South Africa a few weeks ago.  It is a conversation that suddenly takes an unusual turn.  It is at about this point in the exchange – reference to the township school – that there is a slight pause while our interlocutor takes a few moments to adjust to this unfamiliar situation, where the superficial aspects of everyday conversation give way to more thoughtful questioning and genuine analysis of this incredible ‘holiday’ experience.

Actually, holiday it was not.

When you opt for a volunteer experience, you know that you are committing to a different rhythm from that of a relaxing vacation.  We spent four weeks as volunteer teachers in the township of Kwadwesi.  The leisurely pace of retired life was cast aside for the duration.  Early morning commuting, a hectic working day, followed by evening lesson preparation and marking, these were the routines that re-established themselves into the pattern of our lives.

We had spent our working lives in education, beginning in secondary schools then making transitions into further and higher education.  This time, however, our teaching had to be geared for a very different setting and for a totally different age-range – primary school children.  Fortunately, teaching skills really are transferable and we adapted relatively quickly to the educational needs of the learners of Grade 5 and Grade 6.  What was more problematic was coping with the age and ability ranges and the lack of classroom space.

But those issues were nothing compared to the challenges facing many of the children outside school.  Emafini Primary School serves several communities.  Adjacent to the school are comparatively comfortable bungalows, built during the Apartheid years to house government workers, but just a short distance away begins the sprawl of shacks in the informal settlements where the worst living conditions can mean no running water or electricity. 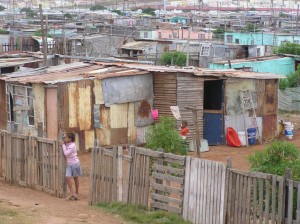 It was from here that many of the children walked every day to school.  At school, at least, they could get a bowl of porridge at seven o’clock and a ladle or two of beans at lunch-time.  Some of the children had lost one or both parents through disease and were living with grand-parents or aunties and uncles; some were suffering themselves because of earlier malnutrition or other health problems but all were doing their best to learn their school lessons.

Education is perceived as critically important in Xhosa culture and English as a tool for self-improvement in a society with very high unemployment rates.    But there are still many barriers to learning.  Class-size is always a significant variable in research into educational achievement.  What chance then for children who, at the age of 10-12 are still in classes of over fifty learners?  This large audience also affects the ability, and willingness, of educators to try modern methods of teaching in which pair- and group-work are the norm.  Movement around the classroom is inhibited by lack of space so rote-learning and choral repetition become standard procedures – accepted with remarkable patience by pupils – and, for teachers, a far safer device for maintaining discipline than potentially noisy active learning.  It is true that any large group of children, if allowed too much freedom in the classroom, will become potentially disruptive.  However, we found that these children, initially rather reticent and wary, made the switch from passive learning to active engagement and production quite smoothly. 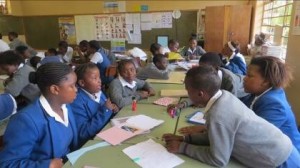 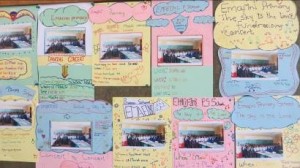 We were able, we think, to convince the teachers with whom we were placed that pupils can respond encouragingly and respectfully to more adventurous activities such as designing posters in groups for display purposes, role-plays and quizzes – not to mention learning games and singing – for vocabulary acquisition of course!  It would take much longer than the short month we were in the school for some of our communicative language teaching strategies to become embedded in the repertoire of ‘our’ educators and much longer again for us to affect in any way the teaching of English across the school.   We did run a workshop for English teachers on ‘Planning and Practice in English as an Additional language’ and, as it turned out, most of the staff were keen to investigate what we had to offer.  However, some seeds of change may have been planted and, who knows, there could be a second sowing at some time in the future.

The main idea behind the Port Elizabeth schools’ project is for volunteers to work closely with each assigned teacher, sharing lesson-planning and delivery, thus working with rather than instead of the normal teacher.  It should be a shared learning experience, ultimately to the benefit of the learners themselves.  The local charity that people and places works with, Calabash, are particularly keen to improve parental engagement with their children’s education.  Historically, there appears to have been some reluctance among parents to visit schools let alone to get involved with supporting children’s learning through volunteer participation, for example, in supporting reading programmes.   As early as our second day at the school, the Principal asked us, along with another volunteer, to talk to parents.  This event – a workshop entitled ‘English language learning: How can you help?’ – was intended to set out a few practical ideas for supporting their children’s homework, vocabulary learning, reading and writing, and so on.  We expected to present to two or three small groups.  How low our expectations proved to be!  Over four hundred parents turned up at the allotted time and many had to listen and watch by the classroom doors as we demonstrated our ideas to this unprecedented mass audience.

As a result of this initial meeting, some parents came forward offering to take on a small volunteer role either in their community or at the school.  With more people and places volunteers going to the school later this year, there is a real hope that some of the enthusiasm demonstrated by the parents at this meeting will be channelled into continuing contacts with the school.  Parent volunteers may not be a new concept but the real test will be to ensure the continuity of any programmes that are set up in the future.

So how, you might ask, does the dialogue in the introduction to this article end?

Well, the most difficult question is often the last one: why did you volunteer?

Everyone has personal reasons for volunteering and that applies as much to a husband and wife team as to individuals.  We do, however, share similar values and luckily want to explore similar new experiences.  When confronted by the ‘why’ question, no straightforward phrase can capture the complex reasoning behind the decision to volunteer.  Neither can a simple adjective describe the daily flood of emotions which we encountered during our time in Port Elizabeth.

If we try to summarise our feelings, we end up speaking in paradoxes.

You know the kind of thing: ‘exhausted but invigorated’, ‘frustrated but rewarded’, ‘saddened but optimistic’, ‘helpless but empowered’.

Our friends know that we ‘did’ the garden route in 2014.  If they ask us why we went back to South Africa in 2015, we tell them that we wanted to experience an altogether different dimension of South African life.

We are not just interested in places but in the people who live in them.