Polly has gone and Estolene has picked up the reins. Finances were in disarray; the carers didn’t receive their stipends for 3 months and food supplies were short, but a new board is to be formed with a more democratic rather than autocratic management style; the centre is settling down and the future looks promising. Funds and food are filtering through from the department of social development; the crèche has admitted more children than ever and thanks to the hard work of volunteers both the site and the organisation of the office is so much better.

This time last year flushing toilets, running water and hand basins at the Centre were a pipe dream – now with funds from Rotary they actually exist. The project has not been without hiccoughs, some larger than others! There are 3 cubicles, one male, one female – both with hand basins, and one for the children with 2 toilet pans and separated by a half screen and shower curtain with ‘step ups’ so they can reach; their hand basin is in the corridor. 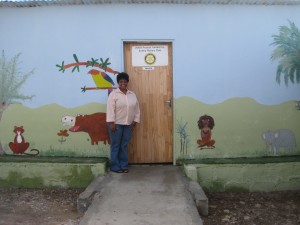 The building was done by the local community. It soon became clear that their building expertise left much to be desired and but for the help of two volunteers from the UK it could well have been a disaster. These volunteers worked really hard to turn the project round; using some of their own funds, lots of elbow grease and finishing it off by painting the outside blue, stencilling angels on the side and painting an animal mural on the front. When I arrived in February the inside finish was in a poor state, some of the plastering wasn’t finished and one of the doors wouldn’t close but I was lucky enough to be introduced to a local businessman and his father who promised to do running repairs and repaint the whole block. They had previously given  the volunteers a lot of help and indeed it was they who erected a shelter and concreted an area so the children could play outside sheltered from the sun or rain; this was paid for by the volunteers and has made a huge difference to the centre. The good news is the ‘loo block’ is  really appreciated, it’s used every day and Nellie who is in charge of the crèche makes sure the children wash their hands; the toilets are kept clean, the floor mopped each night and Estolene is saving up for a mirror for the ladies!!!

Learn more about the Emmanuel Care and Advice Centre here